The Iowa State Fair officially kicked-off last Thursday. With over 1 million people attending the fair each year, it is one of the most iconic and popular state fairs in the country.

It is home to the famous Butter Cow. It has also inspired one novel, three motion pictures, and a Rodgers and Hammerstein Broadway musical.

But do you know that the future of the Iowa State Fair could be dramatically different if the government fails to address the chronic labor shortage issues for seasonal businesses?

Close to two dozen vendors at the Iowa State Fair use the H-2B program. These employers collectively bring in over 300 H-2B workers each year. They would not be in business without the H-2B program and without the H-2B workers. The Iowa State Fair would see a reduction in amusement rides and concession stands and with that, a similar reduction in visitors and participants. The Fair could lose part of what, until now, has made it one of the most famous in the country.

The H-2B program allows seasonal businesses to supplement their U.S. workforces with foreign workers for a maximum of nine months per year only if they have proven, as certified by the US Department of Labor, that there are no willing and qualified US workers for those positions.

The carnival business is a tough business. It is very difficult to recruit an American worker if you tell them they are going to be on the road living out of a motel room for eight month 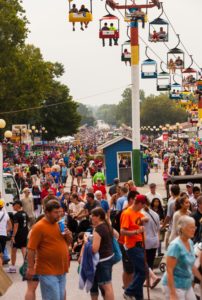 s AND they are going to be laid off after eight months. Would you find this offer appealing?

This is why amusement ride and concession stand operators turn to the temporary, non-immigrant H-2B guest-worker program to ensure the continued success, public attendance, and prominence.
Standing in the way of the Iowa State Fair is an arbitrary cap on the H-2B program that was set in 1990 and has not been altered since. Many of the Fair’s employers are now subject to a government lottery that determines who gets their workers and stays in business and who gets denied their workers and goes out of business.

How is this just?

H-2B employers are hopeful that the cap will be significantly increased in the final government 2019 funding bill. Iowa’s own Senator, Chuck Grassley, will play an outsized role as Chairman of the Judiciary Committee, in determining the fate of these employers. We encourage all Iowa H-2B employers and fans of the Iowa State Fair to encourage Senator Grassley to support the inclusion of language in the final 2019 government funding bill that significantly increases the H-2B cap and protects current users of program.