There are only about 30 H-2B employers in Iowa, meaning it is all the more important that each and every one of them informs their Members of Congress of the importance of the H-2B program to the their businesses and U.S. workforces. The unemployment rate in Iowa is 2.6%. This is the second lowest state unemployment rate in the nation!

We have had difficulty in getting the Iowa employers engaged in our political advocacy efforts. We therefore took it upon ourselves to go to Iowa to meet with (almost) every Iowa H-2B employer.

SEA board member Veronica Birkenstock and I spent three days in Iowa beating the pavement with the goal of getting every Iowa H-2B employer engaged in our political advocacy efforts.

After landing we headed to Altoona to meet with Jon Moss, the Executive Director of the Iowa Quarter Horse Racing Association. 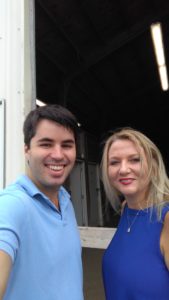 veral horse trainers in Iowa use the H-2B program. Jon explained that the IA horse racing industry is an $120 million industry. The H-2B workers serve as grooms for the racing horses. Each groom supports 5-6 horses. In an ideal world each groom would support 3 horses but the labor shortage means that every stable-hand is having to support 5-6 horses. This means that the H-2B workers in the IA horse racing industry support over $12 million in net output!

We then headed north to stop in at All Star Concrete.

On Wednesday we headed to the Cedar Rapids area. First we met with Jack Blong of Suburban Landscape and Brian Stevens of Stevens Erosion Control. Both companies were capped out this year and are facing enormous difficulties as a result.

We then headed north. We first stopped in at Greg’s Lawn Service. Thank you Donna Scharf, for accommodating us and for your commitment to fighting the good fight. Donna’s husband, Greg Scharf, joined us at our fly-in last week and met with Senator Grassley’s office to share his story. 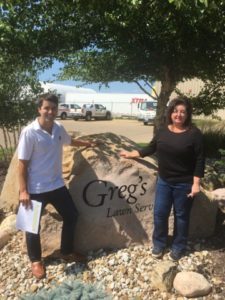 We then met with Delaney Concrete and Culver’s Garden Center and Greenhouse.

We then hit the road for the three and a half hour drive to Fort Dodge, IA.

Mulford Concrete does a lot of work at ethanol plants. Alewelt Services is another large concrete company. They use H-2B for their truck drivers. They are offering their truck drivers a $10,000 sign on bonus but still can’t find enough takers! This is how tight the labor market is.

We concluded the trip by stopping by the Bernard Law Firm. Aaron Benard does a majority of the paperwork for Iowa H-2B users. If you are a client of Bernard Law Firm, tell Aaron we need his help with our political advocacy efforts. He has been unresponsive to date.

This was definitely a worthwhile trip. For many of the companies, it took knocking on their doors to get their attention, explain who we are, and why their political advocacy efforts are so needed and important. Many of them would never have responded to us, no matter how many phone calls, direct mail letters, or emails we sent.

I am hopeful that each employer will now be engaged in petitioning their Members of Congress going forward and that a few of them will attend our fly-in later this fall.