We first want to thank the Administration for recognizing the labor shortage for seasonal employers. We do anything and everything to hire Americans first but in the current economy, there are not enough Americans to fill all the short-term, seasonal jobs.

The opponents of the program have argued that releasing additional visas hurts Trump with his base because his base opposes the program. Our opponents make the case that the majority of H-2B employers abuse the program and are only in it for “cheap labor”, which is not possible considering USDOL sets the wage rate (level 3 wage). This is not the case. H-2B employers are Trump’s base. As a general rule, H-2B employers are strongly conservative and are supportive of the Administration. They are your people.

In landscaping for example, many started in high school with a single mower and now own multi-million dollar businesses.  Many seasonal business owners did not go to college.  These business owners and their employees are hardworking, blue collar, patriotic Americans.

Take, for example, Matthew Smith, owner of Rocks Property Maintenance located in upstate New York. Smith, 36, founded the company when he was 20 years old. in 2012, because of his struggle finding an adequate labor-force, he was debating selling his business. This is when he decided to enter the H-2B program. It transformed his business. His company went from $400,000 in revenue in 2012 to $1.8 million in revenue in 2019. He went from one year-round, full-time American worker in 2012 to seven now. But he could lose everything if he does not get his 10 H-2B workers this year. All of his assets are tied up in the company. He was capped out last year and if he did not get workers from the supplemental visas, he would have gone out of business.

Smith had not voted until the 2016 election. He thought his vote didn’t matter but he saw something different in President Trump. Someone who understood the plight of the so called forgotten Americans. The blue collar patriots that the ruling class had thrown to the curb. He voted for Trump and convinced his friends to vote for Trump. But now he feels that the President has abandoned him. He knows Trump understands what he is going through. Trump campaigned in 2016 in support of the program! Yet he and/or the agencies made a political decision to release the 35,000 visas, instead of 45,000 or 64,716 visas, with onerous restrictions and stipulations. If the rule follows the announcement, a majority of employers will only have access to the first tranche of 20,000 visas. Over half of the currently capped out employers will be capped out again. Why is the administration picking winners and losers among these businesses?

One more example is Danielle Bane, co-owner of Quality One Inc., a landscape company located in Havre de Grace, MD. Danielle founded the company in 1991 with her husband. Her two sons now work for the company. Quality One has been participating in the H-2B program for 15 years. They employ 15 American workers and 12 H-2B workers. In 2018, Quality One was capped out. They resorted to drastic measures to try to find American workers. They even hired a staffing company to recruit American workers from around the country, just like the domestic guest-worker program CIS calls for. It was a disaster. After spending tens of thousands of dollars, they hired over 20 workers from all around the country only for 95% of them to leave after a few days on the job.

Quality One is once again capped out this year. Without their H-2B workers, they will have to sell assets and permanently reduce the size of their company. They can’t only count on the local home schoolers and church members so long. Danielle Bane and her family are God-fearing, patriotic Americans. They supported Trump from day one but now they feel let down by the President and his administration. They are Trump’s base. These are the people that propelled President Trump to his historic victory in 2016.

Click here to watch a one minute video of Bane explaining her story. In the photo below, Quality One’s American workers are on the left and the H-2B workers on the right. 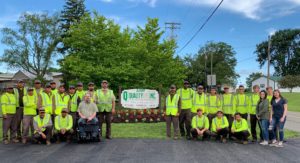 This is all to say that small, seasonal employers are your base just as much, if not more so, than the opponents of the program, many of whom have never run a business and do not understand how hard it is to run a small business. We ask that you consider these employers too as you look to finalize the supplemental H-2B rule. Smith’s and Bane’s stories are only two of hundreds that are very similar.

We have been thinking about the anti-immigrant groups making the case that the supplemental visas are not needed due to hourly and contracts workers being laid off due to coronavirus. First, there are over a million more jobs available than people so these jobs need to be filled first and second, how can you expect these seasonal employers to find these workers? These groups and DOL need to promote the seasonaljobs.DOL.gov website to these workers. You cannot expect us to stand outside an airport handing their cards to gate agents and baggage handlers or to contact every catering office in town. We have businesses to run. In addition, most of the workers being laid off are not looking for this type of work, even if offered.

We have constantly asked Breitbart, FAIR, Numbers USA and CIS to promote the DOL jobs bank to their readers but they refuse. The Seasonal Employment Alliance includes it in its Twitter bio. They keep telling you that there are Americans out there to do the work but they refuse to help fill the jobs or make these desperate Americans aware of how to apply? Hmmm… 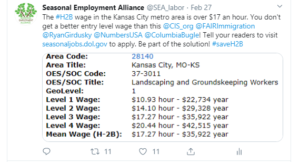 We are willing to make a compromise. The American worker recruitment period is required to stay open until 21 days before the job start date. Due to the coronavirus situation, why don’t we extend the open recruitment period until the 50% point of the job order? In exchange, you agree to sign off on 45,000 visas, 35,000 returning workers and 10,000 new workers from the Northern Triangle countries. If you could arrange for us to sit down with them, we would be open to agreeing to promote DOL’s job bank on conservative sites. We are, of course, always willing to co-host a job fair with them. They do not even respond when we offer.

We look forward to your response.