On December 9, 2019, over 150 people, representing fifty-two Philadelphia area seasonal employers, held a mock lottery at the Valley Forge Casino to highlight the devastating impact, absent cap relief, the Department of Labor H-2B visa lottery will have on the 5,000+ small, seasonal employers who rely on the H-2B program to supplement their U.S. workforces during their peak seasons. Click on the image below to watch the video of the event. 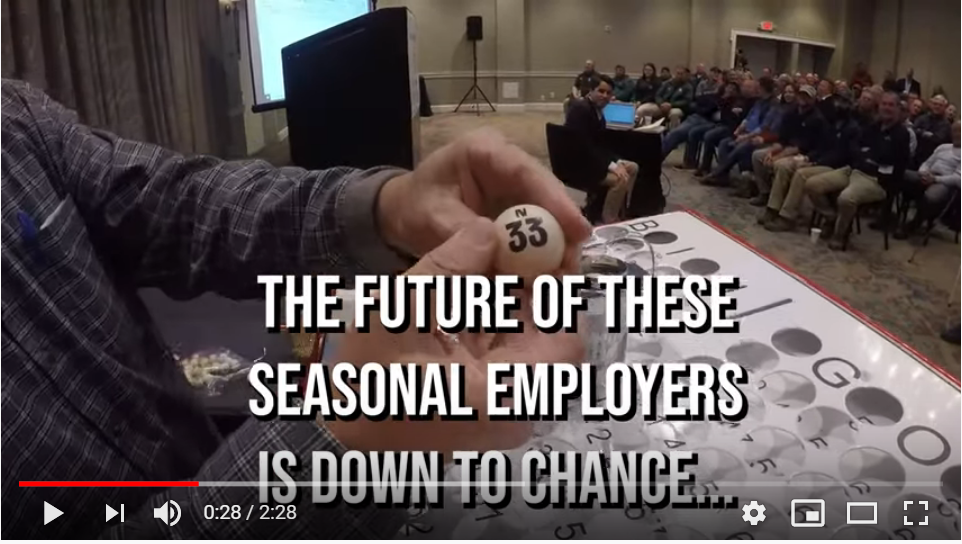 Over 5,000 companies nationally rely on the temporary, non-immigrant H-2B guest-worker program to supplement their U.S. workforces during their peaks seasons. The H-2B program is split into two halves, 33,000 for the first half (Oct.-March) and 33,000 for the second half (April-September). The first half cap was met three weeks earlier than last year forcing all seasonal employers with a date of need past mid-January to apply for the second half allotment. The demand for the April 1 visas is expected to exceed supply by four times.

To make matters worse, the Department of Labor has decided to move to a lottery system (or randomization process) to determine who will be awarded the visas. Those who do not get selected will be forced to cancel contracts, lay off full-time American workers and reduce equipment purchases. This will be a substantial hit to the national economy.

The Department of Homeland Security (DHS) Appropriations bill for fiscal year (FY) 2020, introduced on December 16, 2019, grants DHS the authority to release up to 69,320 additional H-2B visas.

We are grateful to DHS and the Trump Administration for the release of additional visas each of the last years. Employers who received the additional visas were able to save their seasons and often their businesses. However, the delay in the release of visas muted much of the beneficial impact of the visas to the beneficiaries and the greater economy.

In 2017 workers did not arrive from the supplemental release of visas until August, 2018 in July and 2019 in June. This was well after the busy spring season for those in the landscape, hospitality and outdoor amusement industries.

Absent an adequate workforce for their busy spring seasons, employers were forced to cancel contracts, lay off full-time American workers and reduce equipment purchases. Many employers had to permanently reduce the size of their companies.

Small, seasonal employers and their American workers call on the Trump Administration to release the full 69,320 H-2B visas it is authorized to release expeditiously.